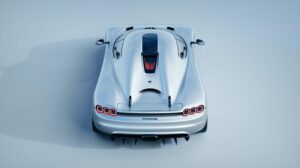 How quickly has the performance world turned in 20 years?

When Christian von Koenigsegg built his first Swedish missile in 2002, the Koenigsegg CC8S set a Guinness record for the most powerful production engine, with a then-stunning 655 horsepower.

To celebrate 20 years of crafting some of history’s fastest showroom cars, and his 50th birthday in July, Koenigsegg chose Pebble Beach to unwrap a roughly $3-million callback: The CC850 generates 1385 ethanol-aided horsepower from a twin-turbo, 5.0-liter V-8, more than double the force of his firstborn hypercar. The company’s CEO and founder recalls a U.K. magazine review of that CC8S. 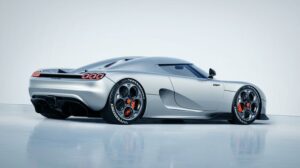 “It said, ‘This is crazy, 655 horsepower is way too much!’ And today we have E-Class AMGs or BMW 5-series with that kind of power,” von Koenigsegg said in a video interview this week.

“But that CC8S put us on the map, and was the foundation of what we’re doing today.”

The CC850, he said, “is a homage to what is the single most meaningful car in Koenigsegg history.” 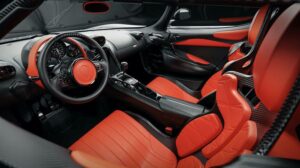 Those analog foundations included a gated six-speed manual transmission, whose snick-snick pleasures I experienced in the only Koenigsegg I’ve driven: A merely $1.05-million, 245-mph CCX borrowed from a Long Island dealer in 2008. (With the wide-eyed dealer riding shotgun, I redlined third gear on Route 9W overlooking the Hudson River…at 128 mph). The new CC850 looks to deliver those throwback thrills, with a technical twist never before seen on a production car. This crazy-complex transmission is designed to look and feel like a traditional six-speed manual. There’s a bona fide clutch pedal and a spectacular-looking gated shifter—slender rod, exposed mechanicals, barrel-shaped knob—that’s topped with a Swedish flag, as on the CC8S. But that mechanical interface masks the wizard behind the curtain: The company’s Lightspeed Transmission, an engineering marvel with nine speeds, seven clutches and shifts in as little as two milliseconds. 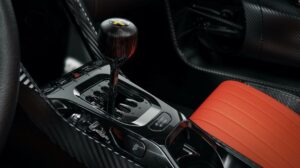 What the company calls the “Engage Shift System” can be driven as an adaptive, clutched manual with six forward gears — and two sets of driver-selectable gear ratios for road or track. Or, switch to seamless nine-speed automatic operation and either chill out or hang on tight. The company says it’s the world’s first manual that can adapt gear ratios for various driving situations. The clutch pedal integrates hydraulic force feedback for natural feel, but shifts entirely by wire. Ditto the mechanical shift linkage inspired by Swiss chronographs, whose commands are translated through the auto gearbox.

“Great care has been taken to make the ESS one of the most engaging manuals ever created,” the company vows in a press release. 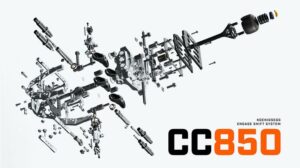 “You can operate it just like a normal clutch, there’s no difference,” von Koenigsegg says—including clumsy operation, as Monaco valets are forewarned: “If you jump off the clutch, the car even lurches and stalls.

“It said, ‘This is crazy, 655 horsepower is way too much!’ And today we have E-Class AMGs or BMW 5-series with that kind of power,” von Koenigsegg said in a video interview this week.

Once shifts are mastered, the CC850 will lurch toward infinity with 1020 lb-feet of torque, even if premium unleaded dings horsepower by 200, to 1,185 horses. Corn-fed with E85, the streamlined car matches the Koenigsegg One:1’s claim-to-fame from 2014, with a power-to-weight ratio of 1385 horses to 1385 kilos, or 3047 pounds. Slender form is aided by a stiff carbon-fiber monocoque with aluminum honeycomb, a safety passenger cell, and a body in carbon fiber with kevlar. Ceramic brakes make room for 16.1-inch rotors up front, on staggered wheels (20 inches front, 21 rear) shod with Michelin Pilot Sport 4S rubber. As with the 1600-horsepower Jesko, the in-house engineered motor has no energy-sapping flywheel, making it likely the world’s fastest-revving engine to its 8,500-rpm peak. The crankshaft plane is flat, the intake manifold carbon-fiber, and the exhaust manifold a Tig-welded, 3D-printed hunk of pricey Inconel.

“But that CC8S put us on the map, and was the foundation of what we’re doing today.”

The CC850, he said, “is a homage to what is the single most meaningful car in Koenigsegg history.”

Von Koenigsegg says he’s driven it on the test track and in the company’s hangar. “The performance is staggering,” he says. 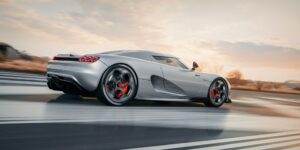 Where the Jesko Attack hunts the fastest lap times via maximum downforce and ducting, and the Jesko Absolute flirts with atheoretical top speed of 330 mph, the CC850 is meant as the driver’s car: Less about ultimate performance, more about ultimate joy in driving. Design priorities include turn-in, handling, and braking. An active, top-mounted deployable wing still generates a hefty 455 pounds of downforce.

“It’s somewhere in the middle, not as fast on track as the Attack, and a lower top speed than the Absolute,” he says. “It’s all a celebration of analog, but with extreme performance on top.”

That said, the new model may have one record safely in the bag.

“It must be the fastest manual car around a racetrack I can think of,” von Koenigsegg says. That is, assuming you accept it as a manual.

Twin ceramic ball-bearing turbos reduce volume versus the Jesko’s to eliminate all trace of lag.

With the $3 million check cleared, drivers settle into the fantastical interior to fondle a classic round steering wheel and admire a chronograph-style gauge cluster with multiple analog needles. (The tach and speedo might need a special warranty considering the workouts they’ll endure). The asymmetrical interior layout makes it easy to adapt to right- or left-hand-drive markets. This follow-up to the Regera, Gemera, and Jesko further harkens to early models with Nordic brand cues including its triple taillights and telephone-dial, center-locking aluminum wheels.

“The synaptic reaction of the engine and the aural sensations are truly otherworldly and incomparable,” the press release says. Owners can feel free to use that explanation when a cop clocks them at over 200 mph.

The new car carries forward familiar brand features, such as its visor-like windshield, easy-access dihedral “synchro-helix” doors, and removable hardtop. The hydraulic Autoskin function lets the CC850 perform a seven-figure strip tease, openings all its doors and compartments at the touch of a button.

Von Koenisegg adds that creating a manual supercar in 2022 is a huge challenge, not least for emissions compliance, but also to give owners the performance and features they expect at these prices. As the maraschino cherry atop this wondrous confection, Koenigsegg jokes that “it has the stuff you’d expect on a cheap car,” such as Apple CarPlay, inductive phone charging, a bird’s-eye camera view, and reverse parking sensors.

With its recently expanded facilities, a company that built three or four cars in its inaugural year now has the capacity to build one per week. CC850 production should begin next summer, limited to 50 units (a nod to Christian’s recent birthday), to be built over 2.5-to-three years.

The prototype shown at The Quail, A Motorsports Gathering at Pebble Beach — perhaps the weekend’s peak tableau of exclusivity, helicopter arrivals, icy oysters, and Botox-frozen features—is the only one in existence, and it’s fully drivable.

With collectors swarming Pebble Beach’s lawns and elbowing each other at seven-figure auctions, what makes a Koenigsegg stand out? Exclusivity, sure, with the company building just over 250 cars during the past two decades. But there’s more to it, the founder says.

“They’re special for many reasons: The technology we put inside, that they’re completely hand-built in every regard, and that we fill them with more homegrown solutions and technology than any low-volume car that I know of.”

originally posted on Road and Track